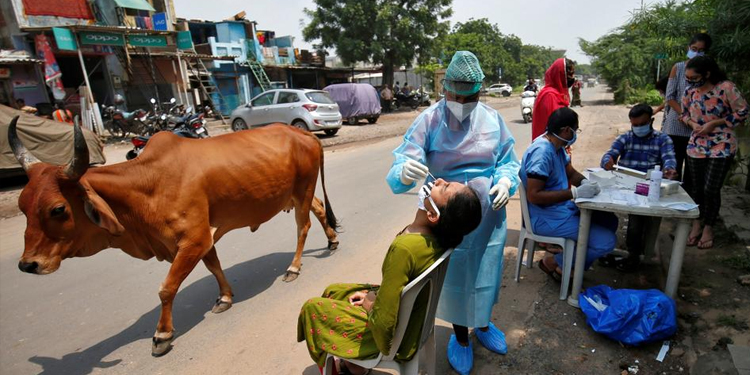 Coronavirus update: WHO reports record daily increase in global cases up over 307,000

The World Health Organisation has reported a record one-day increase in global coronavirus cases, with the total rising by 307,930 in 24 hours.

The number of domestic passengers arriving in Wuhan has returned to pre-pandemic levels as China closes in on one month without registering a locally transmitted case.

Meanwhile, cases are surging in Indonesia, Austria and the Czech Republic, where there have been four days of record daily infection rises in the past week.

The World Health Organisation (WHO) reported a record single-day spike in global coronavirus cases on Sunday, with the total rising by 307,930 in 24 hours.

The biggest increases were from India, the United States and Brazil, while deaths rose by 5,537 to a total of 917,417.

Both the United States and India each reported more than 1,000 new deaths, and Brazil reported 874 lives lost in the past 24 hours.

Domestic flights back to normal in outbreak's epicentre

Domestic air travel in Wuhan, the epicentre of the global coronavirus outbreak, has returned to pre-pandemic levels, authorities say.

The virus was first detected in Wuhan late last year and the city underwent a draconian 76-day lockdown as its hospitals struggled to deal with a wave of cases that required the rapid construction of field hospitals to handle the overflow.

Since reopening in early April, life has gradually returned to normal and numbers of domestic flights serving the city, as well as the number of passengers, had both fully recovered, according to the operator of Wuhan Tianhe International airport.

It said 64,700 passengers were transported aboard 500 domestic flights on Friday.

The airport is preparing to eventually resume international passenger flights to destinations such as Seoul, Singapore, Kuala Lumpur and Jakarta, Qu Xiaoni, the state-run Xinhua News Agency quoted an airport representative as saying.

China has gone almost a month without registering a new case of local transmission and on Sunday the National Health Commission reported just 10 new cases — all of them imported.

Hospitals are treating 151 people for COVID-19 and another 357 people are in isolation after testing positive for the disease without showing any symptoms, the commission said.

Indonesia has reported its sixth consecutive day of over 3,000 new cases, just as the capital city of South-East Asia's most populous country prepares to bring back social-distancing restrictions.

To try and stem the spread of the virus in Jakarta, employees of businesses considered non-essential will be required to work from home from Monday.

Certain government workers will be allowed to work from offices.

The curbs will be implemented for two weeks, but could be extended.

Austria's leader said his country is experiencing a second wave of infections.

Chancellor Sebastian Kurz announced on Friday that the Austrian Government would reimpose measures like mandatory masks in shops to curb a rise in new infections.

Mr Kurz said developments in Vienna are "particularly dramatic", with the city accounting for around half of new cases.

He said Austria will soon be dealing with 1,000 new cases per day.

He called on Austrians to reduce social contacts, wear masks and keep their distance "as well as possible".

He predicted "a tough autumn and winter," but stuck to his assessment that things should be largely normal by next summer.

Israel will enter a three-week nationwide lockdown starting on Friday to contain the spread of the coronavirus after a second-wave surge of new cases.

During the lockdown, which comes during the Jewish High Holiday season, Israelis have to stay within 500 metres of their houses, but can travel to workplaces that will be allowed to operate on a limited basis.

Schools and shopping malls will be closed, but supermarkets and pharmacies will remain open.

Indoor gatherings are limited to 10 people, and groups of 20 are allowed outdoors.

Coronavirus infections have continued to grow in the Czech Republic, reaching a record level for the fourth day this week.

The Health Ministry said the day-to-day increase in new cases reached 1,541 on Saturday, a record high for the country.

Health Minister Adam Vojtech said "nobody expected" such a spike.

The Czech Republic has had 35,401 cases overall, including 453 deaths.

Bitcoin for fledglings: all that you want to know
Information
Wednesday 2 February 2022

Bitcoin for fledglings: all that you want to know
Information

Warhammer Skulls Grandstand Roundup: Add up to War, Tempestfall, Darkside, And More
GAMING
Among Us McDonald's Chicken Nugget Comes to $100,000 On Ebay
GAMING
Resident Evil Village Is Already On Deal At Amazon
GAMING
﻿